For the Voyant blog post I decided to focus on religion during the slave trade. I find it interesting to discuss how religion displayed itself as a large part of culture during this time. To exam how slaver traders and slaves both share faith but also how it revealed itself differently between the groups. Just from the minimum I already knew about this time, slaves sang songs and participated in a lot of shared culture during this time. A lot of which was religion based.  Voyant helped me solidify my research and to sort through data. It helps identify key words in order to summarize information and help you search for good material.

It was interesting for me to learn about the role of religion during this time. These people went through so much pain and torture. Seeing how their faith still appeared through all of it is interesting and inspiring. It also connects us to that period because there are many people who still follow that same religion so strongly. I always think it is cool in history when you learn about something so foreign and seemingly distant and there is a common trait shared with modern times. 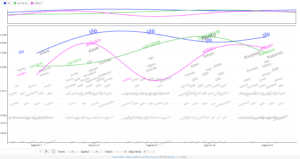