I looked through the listed categories for Guide to Religious Content in Monday’s database containing slave narratives and it helped me formulate my research question: How may religion have been a motivating factor for resistance?

I’m not very well acquainted with using text analysis tools and we discussed the limitations of a tool that looks solely at word frequency, but it could be a good place to start!

The first narrative I put into Voyant was Thomas Anderson’s account. From what the site said, he actually dictated his experience to someone else who wrote it down. He was a true believer and became a preacher when he got older. The word frequencies from his narrative illustrate that –

We can see that the word “God” was the most common in his account. “Lord,” “Know,” “Time,” and “Great” are all common as well. This goes along with our understanding of his faithfulness. It doesn’t do much for addressing resistance and the motivation for that, though, if we know he did resist, it’s not far-fetched to assume that it could be motivated by religion when we see how religious he was.

We discussed the difference between a close and a distant reading. For a question like the one I was asking, a close reading would probably be best. Some things are easier interpreted by a human reading a source rather than a computer. Humans are better at discerning emotion and subjective information(though we discussed sentiment analysis – something that’s actually really cool to look at!), while computers are great for extracting numerical data and objective facts.

I also looked at Reverend G.W. Offley’s narrative. Offley was similar to Anderson in that he was also preaching the gospel. Offley, however, was literate. Because of their similar backgrounds though, their word frequencies look similar – 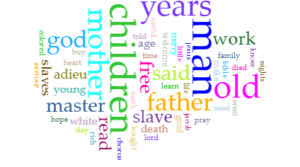 “Children” is the most common, followed by “Man,” “Mother,” Years, ” “God,” “Master,” and “Work.” Religious affiliation is indicated here too, though there’s more discussion of Offley’s family.

While the text analysis tool here might not answer my question about religion influencing slave resistance, the website with the slave narrative database allows us to read the pages addressing resistance and religion they’ve indicated as being relevant. That close reading paired with seeing the word frequencies is stronger. I do think there’s a lot that digital tools can do for the study of history, and I find these new methods really exciting as someone who’s majoring in history, but they aren’t all equally helpful. I believe that word frequency and text analysis works better to answer certain types of questions. The example from The Atlantic of word frequencies in Presidential State of the Union speeches is a fascinating study. Text analysis is good for that kind of thing.

I would also conclude by pointing out that enslaved people’s adoption and reinvention of Christianity is its own form of resistance inspired by their faith. Enslavers used religion to justify their enslaving of Africans and African descended Americans, but enslaved people saw and pointed out the hypocrisy in the cherry-picking that enslavers did to the Bible. Enslaved people emphasized Exodus and Liberation Theology and is noteworthy. Perhaps, depending on how you look at it, the word frequencies I found from the two narratives do prove resistance as being motivated by religion.

One thought on “Week 8: Text Analysis with Voyant”