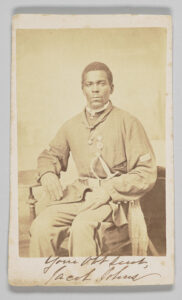 This artifact is a picture of Sergeant Jacob Johns seated. Johns was part of the 19th United States Colored Infantry that served in the Union Army during the American Civil War. This regiment was composed of African American Enlisted men, from the Eastern Shore. He was one of nearly 180,000 Black Soldiers who fought for the Union during the Civil War.

During this week I enjoyed looking at the various artifacts on the various websites. I found it super intriguing that there was a photograph of a United States Sergeant in the Union Army however there was no person who could be credited to it. There was a rough estimate on when the photo was taken and a lack of information about Jacob Johns which upset me as he had served in the Military. I had hoped that there would be more information about him as he was part of the military and that there could be some information about him in some database, but at the end of my research, I didn’t find anything more about him. In this picture, you can see the sergeant bars sewn onto the sleeves of his coat and a dark stripe down the outer side of his leg. It sucks to see how even then Blacks weren’t able to serve during the Civil War until the Second Confiscation and Militia Act in 1862.

It can be difficult to depict slavery and the surrounding content in museums. I think the labels that museums create don’t do the object justice as many times, the museum doesn’t have all the information it needs to fully do so. Slavery and enslavement of individuals is such a fragile nature that many are very unwilling to learn about and I think that inability of society to actually learn from the past, makes it even harder.

The military is something that also was very racist and segregated blacks in future wars. If we fast forward to World War II, more than one million African Americans enlisted, however, they were placed in segregated infantries.

Museums must play a larger role in discussing what social issues are at the moment in order to present history to the public. People tend to visit the museums in hopes of finding truth and it’s harder to find the truth if it isn’t made easier for visitors to engage with. I think a label has to be concise but contain valuable information. If the label has too many words, it won’t keep the visitor focused and they can stop reading. If there are only a few words it doesn’t provide enough evidence. An object name gives us no context or background information that can help further our understanding of the subject.