by: Landon GustafsonPosted on: December 9, 2020

For this final revision, I decided to revisit and rework the recent Data visualization project using Flourish. The reason that I chose to revise this piece is that I ran into some technical difficulties and due to my procrastination I honestly rushed through it. I was familiar with Flourish from the previous data mapping assignment, however, I had no idea all the tools at my disposal with this website. In the original piece, my research question was: What is the difference between Enslaved and non-white freed males in both 1820 and 1850? Expanding on this question I choose to add the differences in each of the states. To complete the task, I began by adding another column to my excel spreadsheet of each state to fit the number of enslaved and freed populations. Once I added the new data into flourish I was having trouble determining what letters to include in the Labels/Time, Values, and Chart grid section. I had to reference my previous work to find what letter corresponds to each section. It was then time to find the right data representation; this time I choose the Column Chart (grouped) and used two charts one for 1820 and the other for 1850. This time I spent a lot more time tinkering with the functions like the y-axis to fit all the states and other things like headers and positioning. 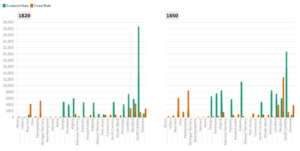 This visual does a lot better job of comparing the Enslaved vs. Freed populations across each individual state. These results are more significant because my original only compared the populations of each in the whole Country. Whereas this visual shows where most enslaved people are concentrated and the states that had more freed individuals. My hypothesis was that the largest majority of slaves would be concentrated in South Carolina, especially Charleston where we learned in class was the largest slave trade center. The confusing part of the data, as seen in last weeks visual too was how it shows there were more enslaved people in the 1820s than 50s. There is no doubt that many organizations and people helped escape efforts so people were free that way. However, there were tactics and even laws put in place to ensure the captivity of slaves. Something may be wrong with the census data because it only shows a couple hundred thousand enslaved people in the 1850s and the number is actually around 3-4 million.

Looking back at my entire portfolio I am actually pretty proud of myself, with the help of my classmates and a great professor like Ms. Andrella. My favorite assignment was Week 5-Podcasting and communication as Public history, despite being the one I was the most nervous about. I have done presentations in the past, but this was the first time I actually had to record my voice. I think most people are on the same page about not liking the way they sound. It was nice once I realize everyone was in the same boat and got help from the guest speakers about how to use audacity. To complete the assignment I decided to write a script that was around 1000 words and use this to guide me while I recorded. I knew without it I probably would stumble over words and have to record many times to get it right. I really enjoyed adding music as an intro and an exit to my podcast, it gave that spice and more of a professional feel. This assignment was good because it took me out of my comfort zone and will help me with things like presentations and interviews in the future.

Throughout this class in the books that we read, discussions, and assignments that required researching reliable sources. I discovered the real truth and history behind slavery. In my high school experience, I was taught some of the mistreatment, but never the terrible things that enslaved people endured and the implications of slavery in today’s society. I’m not sure why so many children are hidden from the truth of slavery and it is “swept under the rug” so to speak. The role of slavery and how it shaped this country’s economy was evident from the start and that’s where I came up with my research question for the second blog post. The third blog post of the Omeka items further drove home the cruelty of slavemasters and made me sick to my stomach. The two items I explored were the bell rack and a newspaper article about a particular family’s reunification. The bell rack was a device attached to slaves to deter escape and in the newspaper article, I couldn’t even imagine when I heard the story of William H Todd who was separated from his family for forty years. It makes me sad the fact that many people sold into slavery were never able to see their families again.

This was my first history course since freshman year, and I added this course because I needed more credits. Never did I think that this class would impact me as much as it has. Also, the many tools I now know and can use in the future like audacity, Flourish, and Voyant. I actually enjoyed each class meeting due to the great and insightful discussions. In my other classes for my major, it is mostly the professor lecturing and the only student involvement is using clicker questions. This was more of a tight-knit group and everyone had the chance to state things they found interesting about the material. All of my credit goes out to professor Andrella, she did a great job setting up the class in terms of workload and interesting projects. I know that this class will help me in my future endeavors and I’m really glad that I chose to take this class. Thank you professor Andrella for all you’ve done for us and I know you will do great wherever your future takes you!

One thought on “Week 11:Final Revision and Reflection Blog”