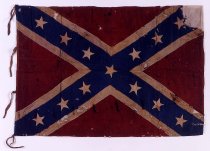 This 35 inch tall 51 inch wide flag was created with wool and cotton. It resembles a confederate flag and was thought to be made in Augusta Depot, Augusta, Georgia, CSA. This flag was carried until the unit had surrendered at Meridian, Mississippi in May 1865. This flag had been sent home to L.C. Levy who later decided to donate the flag to the Louisiana State Museum. This army of Tennessee flag has 13 white cotton stars, stars being 5-pointed, there are also ties attached to the edge of the flag.

It was really interesting to view all the different objects within the museum. The flag I chose stood out to me because the confederate flag was not against slavery. This flag was from the south during the civil war in which the confederates believed that the government was making the second-class citizens and refused to accept their belief that slavery was beneficial to African Americans. I feel like the silences that happen within museums are out of either respect or disrespect to certain items. There are items in museums that had originated from slavery or another dehumanizing event in history. We as people today can know only so much about an object that has happened in the past, there could be a much deeper and scarier meaning to certain items or there might be a better and positive meaning to items. People in museums only look at a object for a small amount of time, for the most part, so it is impossible to know the exact meaning behind it.