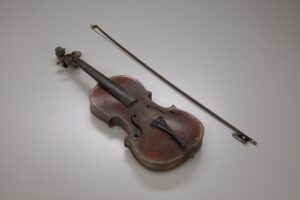 I was very excited to find this object and I would have been excited to find any kind of musical instrument. I think that with my knowledge of slavery and how exclusive some things were to whites, like basic reading and writing, I figured music was one of those things as well. To learn of an enslaved man that was capable of playing such a beautiful instrument was really a wonderful thing to come across. It is difficult to express the beauty behind this object because I do not know what kind of music Mr. Jesse Burke played on this violin or how long he would spend practicing. That is one of the hard things to get past with history like this. You may never know the beautiful details behind such a simple object, and never know the full story. A hard truth to grasp about museums is that they will only give you the hard facts, and maybe not include the emotional segment of some objects. I would have loved to know the genre of music that Jesse Burke played on this violin, to know who inspired him to play, to know why Elijah Burke chose Jesse Burke to give his violin to. Another major question I have after researching this object is – was Elijah Burke related to Jesse Burke? I wish this relationship were explained. The museum states that Elijah was a slaveholder and Jesse was an enslaved man on his plantation, so I would likely conclude they were not related but there is always the possibility of Jesse being the child of a woman that Elijah abused on his plantation. Aside form the museum just purely not knowing this information, another reason to not include it could be that they do not want to take away from the object. It is possible that the museum would like to preserve the identity of the object and that could mean not including more information about the people that were involved with it. Although, I think museum-goers would be much more engaged with the objects if they were given a background that explained some of the mysteries behind the history of this violin.

One thought on “Museum Label”