The research question I chose was, “How do slave populations of old and young African Americans compare between men and women in the 1850’s?”.  The data visualization I chose for this research questions data set was, a bar chart.  The chart shows four total columns, two for enslaved men and two columns for enslaved women in the 1850’s.  Both of the columns for each gender represent a specific age group.  I chose the younger side of the age group to be 15-19 years old and the older age demographic to be 60-69 years of age.  I used this data because I found it interesting to see the difference in ages; however, it is rather disturbing to think just how old and how young some slaves were in the 1850’s.  Building this data set within Flourish was a relatively easy experience as I was able to choose exactly what data I wanted to use to create the bar chart.  The Flourish website makes the graph instantaneously and automatically labels the data.  I found the bar chart to be the most efficient way to visualize this data as the other options seemed to be potentially confusing to understand for the viewer of the chart.  For example due to the nature of the variables that I am comparing, A pie chart really wouldn’t work well for the visualization.  For my particular bar chart I manually edited the coloring of the bars to demonstrate the difference between enslaved males and females within the Flourish interface.  I found this feature of manually being able to create color exceptions to be very useful and relatively easy to accomplish.  Overall the experience of using Flourish was very informative while still being easy to understand.  I did use Flourish for the map blog post as well which was a bit more complicated however, the website does such a great job at integrating data in visualizations. 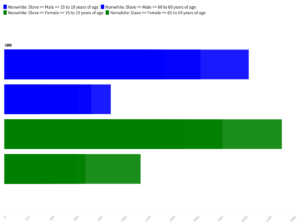