For my final revision, I mentally shuffled through a few ideas of which week’s blog post to update. I considered making another podcast and adding to my discussion from Week 5 on the motivation and economic incentive of slavery, but I decided I had said all I had wanted to in the original podcast. I also considered expanding on the digital museum post from Week 7 and elaborating on the topic of art history and how it is presented to common citizens, but again I reviewed what I had written and decided I didn’t have much else to add.

While I was satisfied with this resulting graph and I enjoyed my experience working in Flourish, I wasn’t completely satisfied with the analysis I conducted. I instantly began thinking more and more about what more I could analyze with this data as soon as I published the post on our website. I wanted to provide a more meaningful result instead of just saying “here’s what this looked like at this time.” I was inspired to analyze the data in a way that could show how our nation changed over a period of time, and how it improved or regressed over that time interval. Flourish was very simple and effective in how it was easy to manipulate and visualize data, so I jumped at the chance to work with it again. Since the data collection I was using had been taking the same sort of data from 1790 all the way until 1850, I decided that analyzing the difference in population of both free and enslaved nonwhite people in each state between 1790 and 1850. 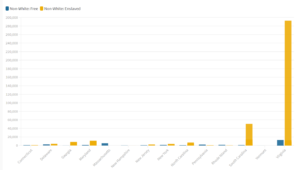 There are a few takeaways from this graph that start to paint a picture of race relations in young America. First, we can very clearly see that there are far more nonwhite people in Virginia than any of the other states, and that the majority of them were enslaved. This leads into two other key points. First, the amount of enslaved nonwhites outnumbered the amount of free nonwhites in all but four states – Massachusetts, New Hampshire, Rhode Island, and Pennsylvania (Vermont had no recorded nonwhites). This implies that at this point in time, most states in America did not recognize nonwhites as equal human beings, even in some Northern states (which would become the region of anti-slavery sentiment by the Civil War). In addition, the amount of enslaved nonwhites tended to be much higher in the southern states. This illustrates how dependent the southern states were on enslaved people to drive their economies.

Then, I plotted the same statistics for 1850: 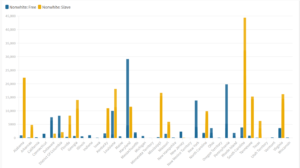 Comparing this graph to the one from 1790, we can see how the country has evolved in those 60 years. For starters, we can see that of the 14 states that existed in 1790, only four of them still have more enslaved nonwhite people than free nonwhite people – and all four of those states (Virginia, the Carolinas, Georgia) were located in the South.  When we look at the new states that had since been admitted into the U.S.A., we see a particularly interesting pattern: the Northern states had zero enslaved nonwhite people, while the Southern states’ nonwhite population consisted predominantly of enslaved people. This was the result of the Missouri Compromise, and the tensions over it eventually boiled over and led to the Civil War. Flourish is an extremely useful tool that helps us visualize the data, and that data backs up our historical knowledge of the occurrences of that time period. I have taken other classes that were centered on coding in order to produce data visualizations, but Flourish does most of that work for you, and that is why it was so easy to use and part of why I appreciated it so much.

As I’ve brought up many times before, I am a statistics major here at MSU, so I am no stranger to data analysis and most of my classes that are required for my major are focused on the technical and mathematical aspects of manipulating and analyzing datasets. However, when you focus on the technicalities too much, the true meaning and goals of the statistical analysis that you are conducting sometimes gets lost in translation – you sometimes forget that the whole point of conducting the analysis is to have real-world applications; you want to help prove a given claim and use that to inform your decisions. I think that the way this class was structured helped me realize to always remember what the end goal of whatever analysis I am conducting and to make sure whatever I’m doing connects with the problem I am trying to solve and makes intuitive sense when I am presenting it to an audience. I believe that helps me be more conscientious and thoughtful about my work in other classes and my career moving forward, which in turn will improve my resulting work drastically.

Overall, I think my total portfolio of work helped me to use a large variety of different methods to analyze history and data associated with it. It was very fun to learn about all of these different tools that are out there and that can help with analyzing historical data and can be useful with other types of data as well. I am very grateful that I had the opportunity to work with all these new tools and with different types of subject material and data that I haven’t had the opportunity to work with in other classes up to this point.

I am going to miss this class, it helped me see some very interesting viewpoints on a lot of topics I had previously thought were foregone conclusions. Thank you Professor Andrella and all my fellow students for making this class such an enjoyable experience!

One thought on “Final Revision and Reflection Blog”