My post that I want to reflect on is actually one of the first proper blog posts created in this class and because of that I believe that there is much I can do to revise the post considering the skills I used have been much improved by the nature of this course. Here is my blog post from week two, “The Schermerhorn book talks about the history of slavery. He starts off explaining how slavery was essential at the time and it spread into all aspects of life. It was very interesting how there was a sense of liberty at the time but not liberty for all, in the sense that many said it was there right to keep people as property, which seems to contradict itself. This is known as the American Paradox. It also was very interesting to hear that slavery made up nineteen percent of the economy at the time. Due to the construction of race, Europeans could come over and vote immediately while slaves who had been in the US for generations weren’t allowed to vote. Another topic touched on was the difference between a slave society and a society with slaves. The American south is a slave society because of how essential slavery was, whereas somewhere like Canada was a society with slaves because it was tolerated but was not essential to the order of that society. When taking history courses farther down the line of our academic career we often find out things that weren’t explained to us when we were younger due to the violence and severity of it which often leads young ones to grow up looking up to our founding fathers and not knowing just how big of the “bad guy” the US was at the time. This is similar to how Thanksgiving is taught to young ones as well, because our history is so tied to patriotism it is often hard to teach such controversial things to young minds. One part of being a great patriot is being a diligent critique. We were shown a painting where there is a white woman who is the center of the painting not doing much, while there are people of color engaged in activities, whether they are shown as enslaved or not. We were also shown an abolitionist ad from 1776, this was essentially a recruitment ad saying that there was pay and proper equipment for those who believed in liberty over slavery and who wanted to join the fight. This was our introduction to digitalized direct sources that we couldn’t physically touch but we had access to online. After looking at the abolitionist ad my research question would be surrounding these ads. “Were there more abolitionist ads or pro slavery ads in the 1770’s?” Once this is decided I would go through the refined google research or the library of congress or DPLA or chronicling of America in order to seek out more ads during this time using either keywords or a time frame filter. Once I find these I will either have enough for my research question or I may need to rephrase it if I find out that there were no pro-slavery ads or there were just as many. From there I may need to visit a library of sorts that has old documents like so or maybe just their website would have access to this.” I think that throughout this blog post I speak about my intro to digital history and how I would go about acquiring more knowledge. One of the first things that I can say would be different about my approach is the sheer number of valid sources I have to use. In the blog post I speak about using three online sources before manipulating my question perhaps. Now at the conclusion of the course I have a whole compiled list of over twenty sources that confirmed have access to digital documents to help me answer one of the many research questions I came up with throughout the course. I also now have access to many other tools that aren’t even directly related to the sources themselves like Voyant and StoryMap JS. I think if I was able to use Voyant with this assignment I would be able to pull a lot more documents that have keywords and topics that I need to search for to find answers to my research question. With Voyant I would be able to search through which documents would be valuable to me and which wouldn’t at a much higher rate. However, it is quite interesting as the hardest tool I found to use turned out to be the most useful to me. When learning to use Voyant I was struggling with the interface and the point of it in total. Once I was able to understand how the actual program worked, I had what one could call an, “ah ha” moment where I realized just how much time could be saved by using this. Attached is a screenshot and although the actual keywords I put in don’t make much sense and this was before I knew how to work it. You can immediately see it show a pattern for you and find topics in different documents for you at a rate unachievable by humans. I think as an entirety this class was one of the ones, I actually learned the most from. Not only about the actual subject material of the history itself, but the knowledge of how to gain access and use the internet to your advantage. The skills we learned this semester can be applied to any subject requiring finding info on the internet. And I especially believe because of how compact I was learning these subjects because of my situation I was really able to compound my knowledge and skills and use them together the deeper into blog posts I got. 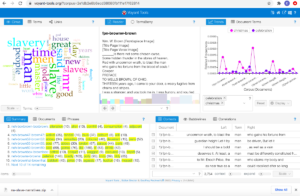 One thought on “Final Blog”