by: Ashish MachnoorkondaPosted on: December 9, 2020 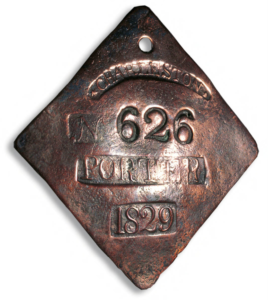 In my final revision and reflection, I have chosen to reattempt Week 7 blog and change my topic in its entirety. A few days after when I submitted the museum label blog, I stumbled upon a material object that I found in one of my unclosed tabs on the web browser, and ever since I hoped I had found this object sooner. I am using this opportunity to recreate my blog along with my opinions and some facts.

My previous object was called a “Housewife”, it was a sewing kit used by the soldiers during the Civil War to stitch and repair their clothes after experiencing the usual wear and tear during battles. Though it was not related to the history of Slavery in the United States of America, I found it fascinating for its name and wondered why it was named such. I have opted to change my object now. It is a slave tag!

Museum Label: “This is a diamond shaped tag made of copper metal, it was used as a slave hiring badge worn by a slave in Charleston, South Carolina with the inscription: CHARLESTON/no. 626/ PORTER/1829. The inscription was used to identify the slave’s records. These types of badges were put on slaves and rented them as manual labors in the market by their owners. This is one of the examples depicting that slaves were treated as property in the 19th century.”

This slave tag is just another example of treating them as property, it is hurtful to know that the humans were once treated like animals by another group of humans who were divided in the society by a racial complex. To place it in my point of view, one individual literally owned another and had a price for them to be bought and sold like other goods at the time. The era of industrialism really set out the foundation of the greatest country in the world, but its harsh history is not highlighted. In a way, renting slaves for manual labor with identification tags placed on them is just like licensing their hard work for a monetary value for the owners, not the workers. It needs to be acknowledged by the society that in the history of the United States it was considered to dehumanise daily work activities by placing such slave tags on people. It is no wonder the African American slaves hoped for a better life, a free life, to get away from the zoo’s that the humans had created for the other humans. They worked for substantially fewer wages and were not able to afford a proper living, and even if they could save every penny of their earnings and spent it on their freedom, they still wouldn’t be able to afford it. During the course of this semester, I have understood the pain that the slaves had suffered and especially after reading about Henry the Box brown, I have never had a clearer perspective after relating his need to escape the cruelty with this slave badge.

To write all about this piece of object and the emotions that it carries within history is very challenging. Though we cannot express all of it in about 60-80 words, we can hope that the details provided in the Museum label are enough for the viewer to understand its depth. The object may seem smaller as compared to others in a museum, but it carries a greater weight in understanding the history of the nation. There was so much information that I wish I could have included, but it’s all science, the viewer does not prefer a long set of paragraphs and rather would move on to the next one. So, to conclude, it is only possible to assume that the viewer is able to recognise its (Object’s) depth and realises the truth, and maybe one day they might change the world for it to stop being a slave to the racism that is still experienced today.

Attending this course throughout the semester amidst the COVID-19 pandemic was a real knowledge gainer. There was so much to explore and understand the history of slavery in the United States. Most importantly, reflecting on them in form of blog posts in which true expressions can be put into, and that could not have been possible in writing regular essays as I did in the other classes. This way, it was much interesting. Additionally, the reflections in the blogs were based on after experiencing various tools to identify and analyse the data. Understanding and using visualization tool, making a PODCAST, learning to navigate websites like a  hot knife through butter, a narrative map, and a text analysis tool, they were all very fulfilling. It was like experiencing all colors of a spectrum in just one course because I got to learn so much from it. Especially the podcast, it has never occurred to be to ever participate or even be a part of one. Doing one was an impossible task because I knew many people would listen to it, but I did it anyway, and it has put me out of my comfort zone! Though in the beginning, I had regretted to have taken this course because of the time difference I face and the syllabus that included a PODCAST, I am not regretting it anymore. On the other hand, I am glad I took this course. I will definitely use Flourish as my ‘go-to’ visualization tool rather than Tableau which was introduced to me in the ITM class. Flourish is far easier, better and a quick way to achieve targets within a short period of time for presentations. Since I am moved by the Henry The box Brown story, I plan to read more such stories which happened before the 20th century and conduct a few podcasts with my roommate, private for a while and if people like it, I might consider to post it online. In case if I happen to take Psychology classes during my time at MSU, I will use Voyant to understand the results since it is also online and involves lesser work to analyse the data. I am not sure when I will be able to use any skills I learned from this course, but I am definitely certain that I will use it in my near future.