I revised and expanded on the Flourish Week 10 (so the most recent) blog post assignment. In my previous assignment, I compared the number of enslaved people by state. I was s 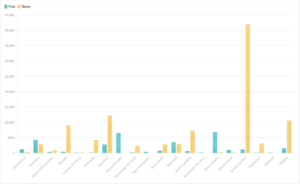 I really enjoyed using Flourish as I really enjoy creating and looking at data. I think looking at data in such a visually appealing way helps us make sense of and learn more about slavery and its impacts. It’s one thing to talk about how many slaves were in states such as South Carolina and another to see that there were 43,106 enslaved people, of which only 1,161 were free enslaved people. It really helps us to understand how many people were affected by slavery, too. There were 82,411 not free enslaved people in the dataset, of which South Carolina encompassed 50.90%. This is insane! All throughout school, we’re taught that there were a lot of people who were not free, but not that there were 82,411 in the 1800’s alone. Seeing data like this really helps to make sense of slavery.

For my process, I uploaded the data I downloaded to my Mac to Flourish. I then added the file to Flourish, deleted the first column, and shaped the parameters to fit what I was looking for. This process went smoothly again, which is a big part of why I chose to do a Flourish assignment again. I feel Flourish is very explanatory and also user-friendly.

If I had more time and were to submit a second final revision, I’d do the podcast. Alas, it is nearing finals week so I didn’t have time to create a new podcast. But I loved that assignment! I thought using the software was a lot of fun and was also a great learning experience for utilizing audio equipment and software to talk about history. Not to mention, I love podcasts and now know what to use if I ever decide to start one.

Looking back on my portfolio, I’m really pleased with it! I feel as though we did a lot of assignments that helped us make sense of history. Like I’ve said before, I really enjoyed the podcasting and Flourish weeks because I felt they were both user-friendly and catered to my interests as someone who likes both talking and looking at data. However, I also really enjoyed the weeks where we searched archives and wrote about documents or objects. I’ve personally always really enjoyed museums, and since I can’t go to one right now, I thought it was fun to look at museum-like things. It was interesting to me, as a museum enjoyer, to write the legend for the artifact, too. I learned a lot about how difficult it is for historians to include all of the information about an object in that legend, and see now how people can so easily miss important parts of history or not have all the information when going to museums, since historians simply can’t include everything. For example, in artifacts of, say, the Civil War, a museum legend might talk about what the artifact was used for. They don’t, however, talk about all of the sufferings the person who owned or used the artifact might have endured. This was something I had never been forced to think critically about before, so I enjoyed this.

I think this course can echo in many parts of my life. In Lyman Briggs, we take classes called HPS classes, which essentially tie history and science together. I feel I will be able to integrate not only sources but the critical thinking skills I obtained from this class into those classes. This class allowed me to look more analytically at data and about the topic of slavery. When I get into the next set of my HPS classes, I will be able to tie the knowledge I’ve gained into the literature and writing in that class, as well. Even in the beginning with the document that talked about utilizing the word “enslaved” instead of “slaves” — that was something I had never been taught before. While that sounds ignorant, I have not taken many history classes in college and my high school history classes never spoke about more appropriate wording. Even that is something I can utilize in my classes later in life in allowing me to become a more conscientious person.

This class will also be beneficial in my career. As a hopeful future physician, I’m a firm believer that being a compassionate and understanding person in medicine and science comes from understanding the past and how that shapes medicine. Understanding how discrimination and enslavement of people worked helps me to become more compassionate towards people who don’t feel comfortable coming to see a doctor. It also helps me to learn and grow and shape my language and knowledge to get rid of diction that I might use (such as “slave”) that isn’t appropriate. Defeating racism in our current society is not an easy task, but rather a process of learning, shaping ourselves, and trying to be better for the people around us. As a future physician, I hope to incorporate the skills from this class into my work to work towards a better America and a more accepting medical environment.