My favorite tool to use this semester was definitely Flourish. I’m glad that we got to use it twice because it was interesting to see all the data laid out in a chart/map. Using Flourish made it a lot easier to visualize the data I was looking at and studying. I’d like to go over the week ten blog post since that was the most recent one that I used Flourish to create. I will enter more data into another similar table to compare the free white females to the enslaved colored females. I feel that males are usually the ones most represented, so I’d like to look at the other gender and see how they compare based on state. I plan to make two charts- one for 1820 (the earliest provided data) and one for 1850 (the latest set of data). The point of this is to see how the census has changed over time. 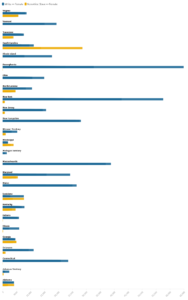 To display my data, I created two separate charts and compared them side by side. They are both the same type of chart (bar), so comparing the data is much easier. Using a bar chart was, in my opinion, the most efficient way to display the data. As you can see from the comparison of the charts, there are many fewer enslaved colored females in the US over the course of thirty years. The number of free white women has also significantly increased, going from a maximum of almost 65,000 in one state to nearly 260,000. This could also be because of the addition of new states. It is also important to note that there are few to no slaves in the northern states. The north was much quicker to abolish slavery, but the south heavily encouraged it. Seeing the decrease in the amount of enslaved women is good, and it shows the progress that the US was slowly making to completely outlaw slavery.

When I signed up for this class, I didn’t know that it would be mainly focusing on slavery. The title “Digital History” made me think that it would be the history of digital technology, and since I love learning about technology, it seemed like an interesting class to take. So it was a bit surprising to me when it was introduced as a class about the history of slavery. However, I think this class has changed my understanding of history. Being in this class has helped me understand slavery much more than high school has ever taught me. There, we were only talking about the bare minimum because a history class was more than just slavery- it was everything. Being in a class that only discusses slavery gives me more time to go over the real history of it. It feels like my mind has been expanded; there were moments where I would read something and almost physically cringe because I was disgusted at what I was reading. It’s hard for me to believe that certain things took place only a hundred years ago; this world has certainly changed for the better, and I’m glad I don’t live in a time where slavery is still allowed.

There were many different assignments that helped me explore aspects of slavery and understand it better. The podcast helped me step out of my comfort zone (since I don’t like public speaking), but it was an interesting project and I’m glad I did it. Using Omeka and other websites to create metadata for text images and objects used by slaves were also fun assignments. I really enjoyed the museum label assignment too; it allowed me to look at different slave objects and choose one that stood out to me so I could learn more about it. Learning the tools used in these assignments and understanding the history of slavery can help me in the future so I am more academically aware of the situations and information around me.