To begin my visualization creation process I decided to use 15 to 19 year old females in slavery in the 1850. Flourish is a tool we have used before, but this is the first time we have created a graph. This website made it easy to convert a large dataset into a simple graph focused on a certain time era and subject. I chose to use the population values of 15-19 year old females in slavery as my Y-axis and as my x-axis I labeled it as the states these females were enslaved in. Without the easy steps of choosing these specific rows and columns, I would be extracting data for hours. I thought this was my best project so far because I knew what I was doing, and I understood my data and what I was trying to accomplish. For my research question I chose to explore which states were more populated with teen girls. I chose to explore this because with all of the knowledge we have accumulated over the semester in this class, we read about the sexual abuse many women in slavery face. I wanted to see what teen girl slaves were most popular in specific states, which would mean the more sexual assault would most likely be in the larger populated states containing this specific age groups. I chose the x and y axises because this would allow me the best visualization of data I was researching. I also think this kind of graph presented the data in the best visual manner possible so that you could depict the information needed for my research question. I think that any other kind of line or bar graph would also be able to present my information well. In conclusion I once again very much enjoyed this project. 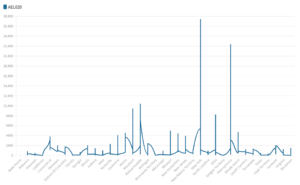