Research Question: Which state had the least slaves? 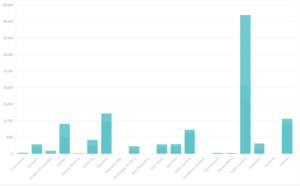 Building this visualization went pretty smoothly. The PDF really helped! Instead of saving the data and inputting it, however, I transferred it directly from my computer to Flourish because my Mac was being weird. Nevertheless, this worked really well.

I chose the number of enslaved pe0ple by the state for my data because I wanted to see which state had the least amount of enslaved people. I figured South Carolina was going to have the most enslaved population (it did), so I wasn’t particularly curious which state would have the most. As for the least, it appeared the Indiana Territory had the least number of enslaved people. This made sense to me. However, I was strangely surprised New York had such a high population of enslaved people. I don’t know why, I just wasn’t anticipating it to be as high as it was (2,257). I assumed it would be under 2,000 and barely surpassing 1,500. I was also surprised because Georgia had a lower enslavement population than I would have thought in the 1800s (9,049). Obviously it’s good that the population wasn’t as high as I had anticipated, but I was nevertheless surprised. In my APUSH class in high school, we talked a lot about the south and about states like Georgia having dense slave populations. This is not to say 9,049 isn’t a lot of people and isn’t terrible, just that I thought that number would surpass 10,000. Thankfully it didn’t.

I utilized a column graph for my data because I felt it best represented my data. A column graph made reading the data significantly easier. Line graphs would have looked strange and been difficult to read and weird. A pie chart would not work well for this data, personally. I think it wouldn’t visualize the data well. I chose a column graph over a bar graph because I felt the columns looked more visually appealing than the bars. While bars would’ve been sufficient and equally as readable, I prefer columns.

As for the scale, the scale was measured based on the enslavement population. The y-axis extended to 45,000 people and the x-axis labeled which state correlated to which data.