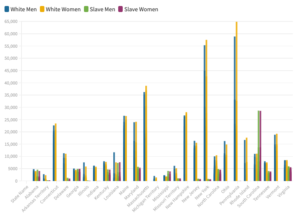 I’ve decided to compare the data between all nonwhite enslaved people to all nonwhite people who were free due to the curiosity of which states had the largest ratio difference of the two. I decided to roll with a grouped column chart as it displays each individual set of data the most accurate, and will properly represent the ratios where it is easy to determine the differences. I believe a bar graph would have worked as well, as it is similar to the column chart and would’ve given me the information just as neat.

Comparing both men and woman of every age, I knew that southern states would have a significantly larger ratio with nonwhite slaves being way higher than free nonwhites. In increments of 2,000, I was able to determine values closer to the most accurate number of both parties. I noticed that South Carolina had almost 29,000 enslaved people while every other state had 8,000 or less, which is crazy to think about. There was only little over 2,000 people in South Carolina that were free. When taking a look at which state had the most free nonwhites, I noticed that Pennsylvania had the largest amount standing between 5,000 to 7,000 people, however, the Arkansas Territory had little to no free nonwhites at all. Looking at the other end of the spectrum I observed how northern states had the least amount of enslaved people, with the Michigan territory having no slaves, alongside Rhode Island and Pennsylvania. To my surprise, Maryland was the only state that had around the same amount of slaves as free people, with nonwhite free males ultimately being the least common and nonwhite free females ultimately being the most common.

This data gave me a better insight on the disparities between the enslaved and the non-enslaved in the year of 1820 for every state, and being able to understand the extremes for both parties during this time frame puts in perspective the history for the states we currently abide by.