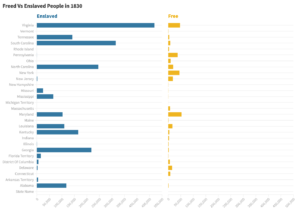 For this week’s post I decided to compare the number of freed and enslaved people in each state in 1830. My experience with creating this visualization was very exhausting. At first I had struggled to use any of the data I would download from the NHGIS website. Every set i downloaded had headings that made no sense, such as one on agriculture i downloaded had “AG9001” as a heading for one of the columns, and it wasn’t until after 30 minutes i realized that there was a little box i had to click to provide me with the appropriate headings, as it was designed to be best used with spreadsheets. After that i struggled to effectively use the software. I kept messing around with it until i figured it out, I completed my first bar graph and realized that the freed people sat on top of the enslaved people’s column and made it look like there were 550,000 freed people and 490,000 enslaved people in Virginia. After a little searching to find an appropriate representation of my data i came across the graph i settled on, and from there i inputted my data and was ready to publish. I published and thought i was all set to go, until i made the blog post and realized it didn’t have a title on it. I went back and fixed it and was on my way. I think that other visualizations that represent different categories of the same overall thing would work best, such as my categories being freed and enslaved people, since they are both measuring people, they get juxtaposed well. Overall i found this to be very rewarding once i figured out how to do it, and it ended up being somewhat enjoyable.