Research Question: How did the introduction of Christianity influence the lives of Native Americans? 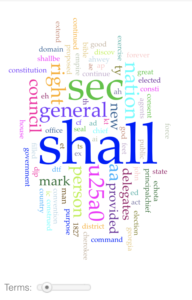 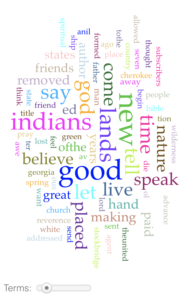 During Wednesday’s lecture, we talked for a bit about Native American language and how it is endangered. Language has always been an interesting topic to me, especially Native languages because there are so many! It is so heartbreaking to hear about Native languages losing traction because that means that parts of Native American culture is being lost as well. This relates to the newspapers we were given to read because it mentions Christianity.

Native Americans were not originally Christian, it was completely through European force and influence that many Native Americans were forced to convert. In fact, I did some research and discovered that Cherokees (who are the subject of this newspaper) originally followed animism. Animism follows the belief that all objects, creatures, places, and natural phenomena have souls and spirits. Personally, I have always been interested in learning more about animism since I learned about it in World History class and to hear that its popularity was diminished because of European colonization is disheartening. Native American religion is apart of their culture and along with their language it has been driven to the brink of extinction because of forced conversion and the belief that Christianity was the only “correct” belief.

In the document “Cherokee Phoenix”, we do not see mention of previous Cherokee religion or beliefs, instead we see how Christianity was literally integrated into Cherokee culture. For instance, there is a column titled “How To Read Scripture” which discusses why the Bible is so important and why Cherokees need to “awaken”. Additionally, the next column discusses the Constitution of the Cherokee Nation which discusses many rules about Christianity. For instance, Sec. 2 states that any person who denies God shall be denied any Cherokee Nation office. While the acceptance pf Christianity was probably necessary for the Cherokee Nation to remain allies with the Europeans, it is horrible that the Cherokees were required to deny their traditional beliefs.

This can also be proven by looking at the images produced by Voyage. I put both of the newspapers into voyage and the results can be seen above. In both of these images, words associated with Christianity such as “God”, “Bible”, and “church” are found throughout the word jumbles. By analyzing this text and using Voyant, we can answer my research question by noticing how the Cherokee integrated Christianity into the Cherokee lifestyle through actions in their newspapers and requiring officials to be Christian.