This week’s blog post was focused on text analysis, so I decided to choose the North American Slave Database to pose a research question.

What was the purpose of the so-called “conjure” that some enslaved people practiced? was it for religious purposes or a strategy to strike fear in the enslavers?

I choose this because I had no previous knowledge of this topic and even had to research conjure because even though I had a feeling it had to do with haunting or witchcraft I didn’t know how it was related to slavery. This was interesting because I’ve heard of witchcraft and the Salem witch trials, but never in the slavery context. I quickly realized that these different practices were only labeled conjure by Europeans. To answer my research question, I used the section marked Conjure and choose two documents that related to the topic. The first was Narrative of the Life and Adventures of Henry Bibb (1849) pg. 25-27, and Life and Times of Frederick Douglass (1881) pg.133-134. These two documents were then put into Voyant, and the following graphs were generated. 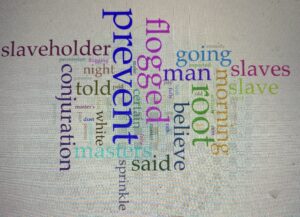 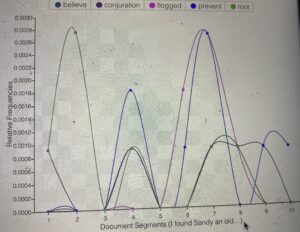 This text analysis an okay job of answering my research question; as you can see above prevent, and believe are some of the most common words. It is hard to understand the scope of these words and what context are they being used. Other words are also commonly used, which don’t pertain to my question. After further research and reading through the sources, I determined that the purpose of “Conjure” was to help people believe they had power over their masters and use these magical powers to prevent flogging. The conjures had certain beliefs about remedies and abilities, and these religious practices helped resistance and rebellion.

Voyant and other text analysis tools are useful when determining if the source is closely related to your question. They also can show the frequency and relation of the words to the topic. However, these tools provide no context to the words and only show how many times they are used. For example, prevent, which was the most commonly used in the documents I chose, can have many different uses and so you have to ask the question, prevent what? Without reading the source, I wouldn’t have been able to realistically answered my question. Voyant is a cool program that you can use many different functions to show the data, so I believe that I will use it in the future to begin research even with some of the disadvantages.