The official page from Cherokee Phoenix and Indians’ Advocate.

For my research question, I wanted to know Cherokee Phoenix’s thoughts on abolition of slavery.   So I first did advanced search of the words, ‘slavery’, ‘slave’, ‘abolition’ and ‘property’.  The first paper had many red highlights, but when I read it, it didn’t have much to do with Cherokee’s views.   Afterwards, I wanted to check what other options I had if I only looked up ‘abolition’, also chose the Cherokee Phoenix and Indians’ Advocate.  There were 5 results, the last 3 had one instance they mentioned abolition and the second result, did not comprehend the text as well because it was a faded newspaper.  However, it was a better selection for my research topic and continued to fix the text analysis mistakes.  I had to do quite a bit of fixing, more than I expected, there was a common issue of words that were cut-off starting a new line I needed to fix for example.  It took awhile to correct (selected 558 words from the page). 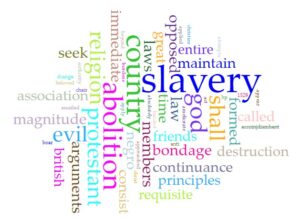 Putting the section into Voyant, the first image I attached displays the words that stick out the most: slavery (6), abolition (4), country (4), evil (3), and God (3).  In addition, we can see that their motives were based around religion.  I checked the frequency of the terms, ‘slavery’, ‘religion’, ‘God’ and ‘evil’ throughout the section.  With the second image attached, the graph emphasizes their association of slavery and religion.  They are implying the slavery is evil and against their religion, based on the graph.  To get a better answer to my research question, I think I would need to analyze more papers, there was not enough information with this page alone. 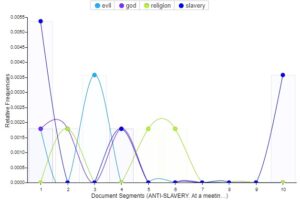 An advantage would be for presenting and for visual appeal, but they need to make sure the diagrams make sense though.  I found the default frequency graph was the most effective diagram showing the relation between the terms, the others, not so much.  Next advantage is obviously having quicker analysis than if it was by human analysis, although it might not be quality analysis.  There is always something they could improve with text analysis, for instance, machine learning type of programming.  Like previously mentioned, they could add an updated feature that can read the words that are cut-off at the end of the lines.

A disadvantage of this text analysis is, we don’t know exactly if the general stance of Cherokee’s were for the abolition of slavery.  Or they were simply covering news about the formation and views of abolition movements.  Another disadvantage I learned from this experience is that text analysis isn’t so great when the document/newspaper is faded.  I spent most of my time fixing the words; however, it is still quicker than manually typing all words.