For the week 8 assignment I decided to choose a newspaper from the Cherokee Phoenix, and Indians Advocate source. I found an interesting article that discussed the abolishment of slavery in certain northern states. I was very fascinated when I learned that many states passed laws to ban slavery in the late 1700’s and the early 1800’s. I did not know states abolished the idea of slavery that early. I always assumed the division between the North and the South started closer to the Civil War. This has led me to develop my research question; How many states abolished slavery before the 1800’s and how did this effect America’s future? After doing extensive research on this topic, I found that 9 states were considered free states before the year 1800. The free states did not agree with the idea of slavery and decided to make it illegal within thier jurisdiction. This information allows us to assume that there was tension growing between the free states and slave states. As time went on more and more slave states became free states, which ultimately led to the Civil War.

I really enjoyed using the Voyant website and I think it is a fantastic tool for students to use to analyze text documents and get a better understanding of the information. I did not experience any issues when the Voyant website. However, I did have issues when I converted the news article into the OCR text replacement. I found that many of the words were misspelled and it had trouble interpreting numbers and dates. One of my favorite features of Voyant was the graph feature which shows the amount of times a word was used and where it was used in the article. In my particular study, I found that the words slave, free, and law were the most used in this article. 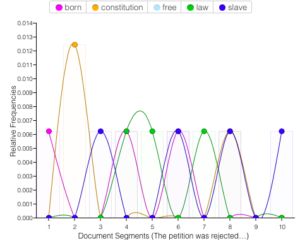 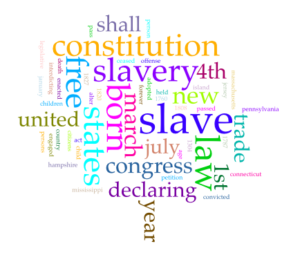