I chose the object titled “Badge”: 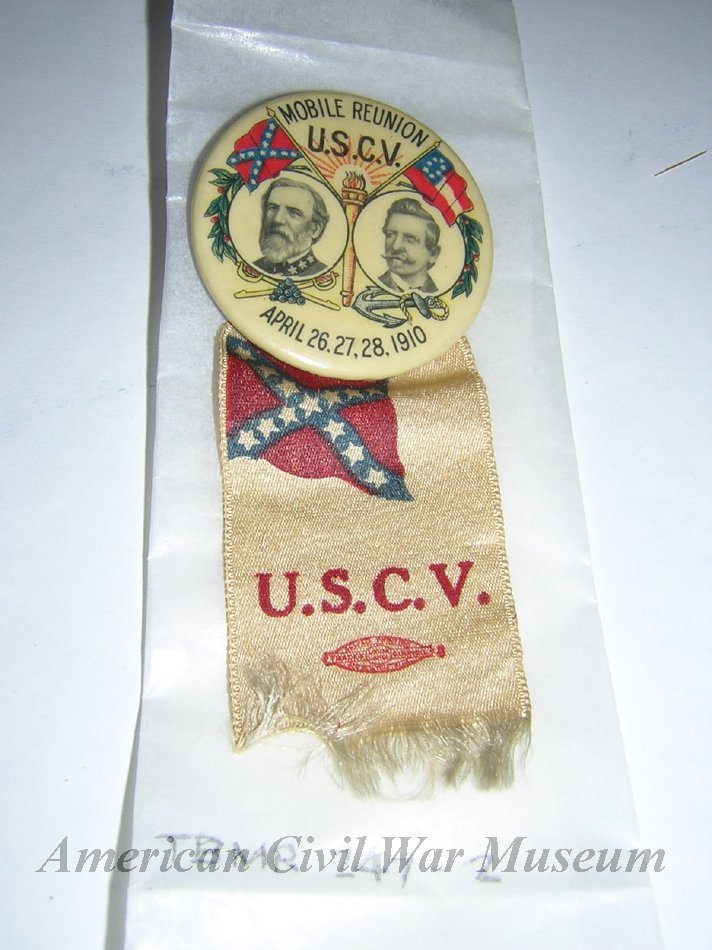 This medal owned by Lt. Col. William H. Stewart commemorates the 20th annual reunion of the United Confederate Veterans on April 26-28, 1910. The medal depicts a torch surrounded by two portraits (the left believed to be Robert E. Lee). The two flags are the Army of Northern Virginia flag (left) and the “Stars and Bars” flag (right), and two crossed swords and an anchor lay below each portrait. The top of the pin reads “Mobile Reunion U.S.C.V.”

I found this object itself to be rather interesting. To me, this object reiterates the point that southerners were not ashamed, rather proud to have been a part of the Confederacy after the Civil War. We still see some Confederate pride in the present day, but in very small numbers. Here, we can see that there were reunions held for veterans of the war on the Confederate side. That fact on its own may not suggest any sense of pride in what they were fighting for, but the portrait of Robert E. Lee  along with the flags and weapons on the medal does support the idea that these soldiers were proud of fighting for the Confederacy. This demonstrates the attitude of many southerners for a significant period of time after the war, that they supported the belief of upholding the institution of slavery. The most intriguing part of the metadata, however, was that this pin was produced by Whitehead and Hoag Company in Newark, New Jersey. Why Confederate merchandise would be produced that far north ignites my curiosity, and it would be interesting to know the story of the production of this medal in order to find that out.

I think museums sometimes limit the information on labels in an attempt to be as objective and unbiased as possible in the information they provide, but unfortunately that leads to them leaving key information out of the description for the given artifact they are presenting. The ultimate goal of a museum is to engage with its visitors and keep them interested in the exhibits, so the issue of information overload is likely looming in curators’ minds as well. Thus, I believe the occasional lack of context or the silencing of some important experiences would be caused by one or both of those two motivations. You don’t want a description to explain every minute detail of an exhibit if it will bore your visitor to death, and you don’t want to accidentally seem biased if you think it may anger your audience enough to leave negative reviews and convince less potential visitors to actually come to your museum. However, I believe that curators should put their priority on informing their visitors as much as possible regardless of whether it may make them uncomfortable, and they should attempt to display as many different experiences as possible in their museums.