I chose the Artifact known as the Housewife 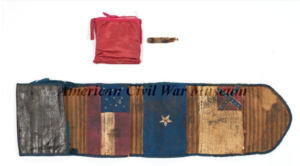 The Housewife was layered with a waterproof canvas containing three inner silk pockets that depicted what almost looked like the First National, Bonnie Blue, and Second National Confederate flags respectively. One of the pockets consisted of a compact needle case with the needles covered in silk cloth and a white thread along with one shell cover holding a small folding knife. This belonged to Lt. Nelson T. Lies made by his wife before being deployed for the war (The Civil War).

This object pumped curiosity in me because “housewife” mentioned in a list of material objects of history made me look at the list twice to reconfirm what I had just seen. Usually, the most common usage of the word “housewife” refers to a married woman keeping busy in maintaining and taking care of the house without being employed for wages or salary. After reading the description and closely looking at the object, I seem to understand what is the purpose of this for a man currently in a war.

Soldiers in war suffered from ragged clothes and tears visible from injuries. I believe the housewife was used to mend their clothes when a tailor is not available on the battlefield. Sewing clothes and their buttons might seem not so important, but I think it is what keeps them warm and secure in climates that are uncertain.

Another question that appeared to me was that why was it name housewife rather than a sewing kit. Maybe housewives used it a lot to repair clothes in the house or because it was made by the housewives to give it to their husbands who were soldiers and naval officers before going to war.

Writing a label for the public view was hard. Not every point of the object could be included in 4-5 sentences, the ‘Why’ (it’s use) portion of the object was not included in the label because it would cover too much of space, so I included a point in the last sentence that implied housewives gave this object to their husbands before going to war to mend their clothes in case of any tears.