The object I chose for this week’s blog post is a box from the American Civil War Museum. 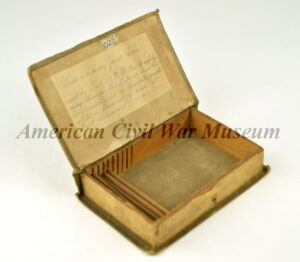 “This rectangular box was utilized as a Decoy Jewel Case and was utilized by Lieutenant William M. Witten. Witten was a prisoner of war at Fort Delaware and utilized the box to carry home objects over federal lines. The objects he carried home were a variety of trinkets he made while a prisoner of war at Fort Delaware. The rectangular box looks similar to a book and has nine slots and four partitions on the left side.”

I thought this object was extremely interesting! I want to first draw on the nine slots and four partitions on the left side. I really wonder what those were used for, as in did he hide certain trinkets in there? Also, the box was fashioned to look like a book, so what I’m thinking is that was part of the decoy to make soldiers think he was just reading, which helped him sneak it across lines. To me, this is fascinating. You hear stories about prisoners of war, but not many like this in history class (at least I didn’t). I think this box is important because it reminds us of some of the horrors of wars, and also is an example of a way people pushed through. This box made me think about what I would have done as a prisoner of war to keep myself going and sane.

I can definitely see how it is difficult to present history to the public. When you present history to the public, you change the way they think about topics. For example, slavery. The way you teach slavery shapes how people not only think about our history but also about our present-day life. If you word something improperly (ex: “slave” versus “enslaved”), it shapes everyday dialogue. Historians have to think critically about how they present the information, as that impacts modern-day society.

It is also difficult to condense so much information into one tiny label. There is so much that goes into an object. Obviously there are simple facts, like origin and date, but then there’s the story of how it was made, acquired, and used. How did it travel with the owner? What did the owner do? These answers change how this object is valued, as well.