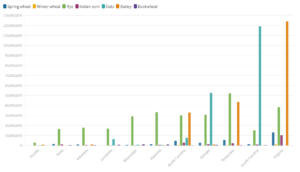 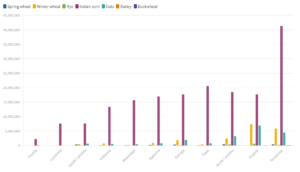 I choose to make a simple column chart about cereal crops production from 1860-1870. This is the period of civil war. The civil war began since 1861 and finished at 1865.  This war is not only the business of men but also crops and livestock. This chart includes 7 cereal and they are : Spring wheat, Winter wheat, Rye, Indian corn, oats, Barley and buckwheat.

150 years ago, the American Civil War, known as the Civil War, ended slavery in the American South. In the plantations of the pre-war South, most of the hard work of the slaves was devoted to cotton, an important pillar of the world economy at that time.

The earliest cotton used for weaving was Asian cotton originating in India and later introduced throughout the Asian continent. In the 16th century, Spanish colonists easily conquered Central America, only to find that the “backward” Indians had planted better cotton than their own. This native to Mexico, “land cotton”, fiber yield and quality far better than Asian cotton, has been widely cultivated since then. Most of the cotton we wear today comes from the fibers of American land cotton.
By the time of the Civil War, three-and-a-half of the world’s cotton was produced in the United States, the vast majority of which were produced in the southern states. Even Britain, the “factory of the world”, relies heavily on American cotton for its domestic economy. At the time, a state lawmaker in the south of the United States said: “No force in the world dares to fight cotton.” Cotton is the king! “
From 1790 to 1860, the number of slaves in the United States increased from 700,000 to 4 million, and almost all southern states were slave states. Cotton created great wealth for plantation owners, but it brought suffering to black slaves: slaves were regarded as the private property of their masters and could be bought and sold at will; Some brutal plantation owners often punish slaves with torture such as flogging and branding.
Before the civil war, The cotton production was 192 million. After the civil war, it became 7 million. Just like these crops. Production decreases like a roller coaster. Without these crops, more and more people lost their jobs, not only those slaves but also white people who lived in south. This makes the south larger Unemployment and more crime and vagrants.

I do not mean I support slavery but I want to say everything have both sides. Before the war, the 2/3 world cotton came from south. After the war, nothing but freedom left. Rarely aid from north for recovering but differ from the defeated country after world war II. All things have the limitations of the times. We can’t look at the past things with today’s eyes..However, slavery is always the enemy of world peace and process of history