My Research Question: What was it like to learn how to read and write as a slave?

To answer this question I focused on the Literacy section of the North American Slave Database. In this section, I chose to look into the  Life and Times of Frederick Douglass (1881). Through this text, I was able to learn about Fredrick Douglas’s experience with trying to read and write. He gives a unique experience that I haven’t really heard of before.

Douglas states that he wished to run away as a child but he wanted to read and write first. He wished to do this because he said he might come into a situation where he would have to write his own pass. He began learning by observing carpenters while working in the ship-yard. When they were getting a piece of timber ready to use he would write the initials of the ship that the piece of lumber was intended for. He says that he soon learned the letters using this process. One of his jobs was to watch the shipyards while the carpenters went to dinner. He says that this was a fantastic time to copy the letters he had written down. To continue to practice, Douglas would play word games with boys at the church. He would also practice with everyday items, such as using chalk and the ground instead of a pen and books. Although this is only one slave’s perspective, it gives a cool insight into the sheer passion and creativeness you have to have to get anything done. It just shows you how mentally tough he and other slaves were.

In this case, Voyant helped me point out where the words “read” and “write”, and the phrase “read and write” was said. I was able to find these points by cross-referencing the three frequency plots (the attached images). These plots helped me find the section in which Douglass wrote about his experience of learning how to read and write.

I think Voyant and in general, Text Analysis can be a very powerful tool. I am a data science major so I am more into numbers but Voyant has a cool mixture between the two. A big obstacle to overcome is the learning curve. I think Voyant can do a better job on how to teach the user to use its tools. Unfortunately, most people do not have the luxury of the members in this class to learn all of these awesome tools. 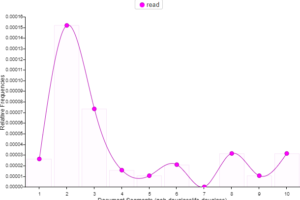 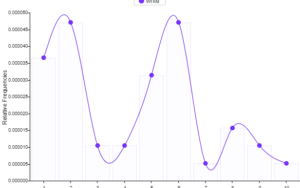 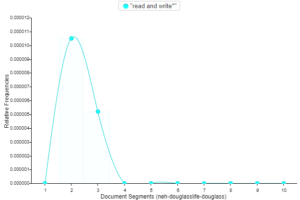